Author(s): Mark Waid
Artist(s): Dan Mora
Colorist(s): Tamra Bonvillain
Letterer: Steve Wands
Publisher: DC Comics
Genre: Action, Drama, Superhero
Published Date: 12/20/2022
STRANGE VISITOR, CHAPTER FOUR: SECRET PASSAGES
The deadly duo of The Joker and the Key have twisted the increasingly powerful Boy Thunder into a walking time bomb of destructive power! Batman and Superman’s quest to guide young David toward the light takes an unexpected turn when the Teen Titans learn of the dark secret he’s been hiding from the World’s Finest! The Titans issue their ultimatum–tell Superman and Batman, or they will! 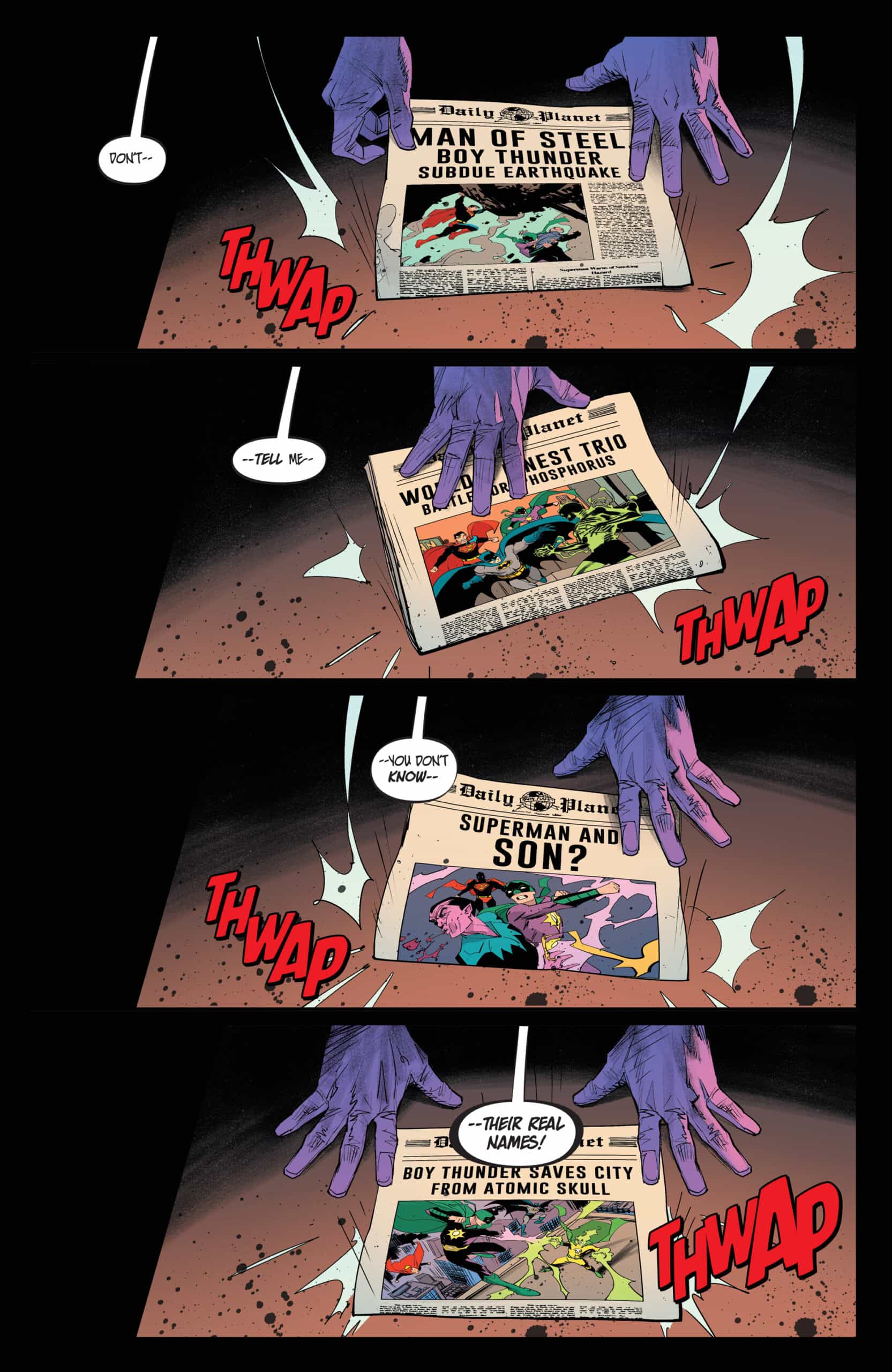 I can easily say that Batman/Superman: World’s Finest is my favorite book of the year. The series is so much fun, gorgeous, and a worthy entry to the World’s Finest title. With Batman/Superman: World’s Finest #10, the creative team is firing on all cylinders and have found their rhythm. Dan Mora’s art and Tamra Bonvillain’s colors are such a powerful combination. There isn’t a bad looking page in this issue. Superman in this issue stuck out to me especially. His inking and shading casted him in the dark many times throughout the issue, but the blue, red, and yellow of his suit still pops brilliantly thanks to Bonvillain. Bonvillain’s skill shines throughout this issue, but I was especially blown away by a sequence where we see the Key’s transformation in a flashback. I would try to describe it but it’s something you should see for yourself. There is one instance where Superman is using his vision and superspeed to look at the doorknobs of the doors left by Key. He is standing in place but Mora does such a great job depicting his motion and Bonvillain’s colors reinforce it. 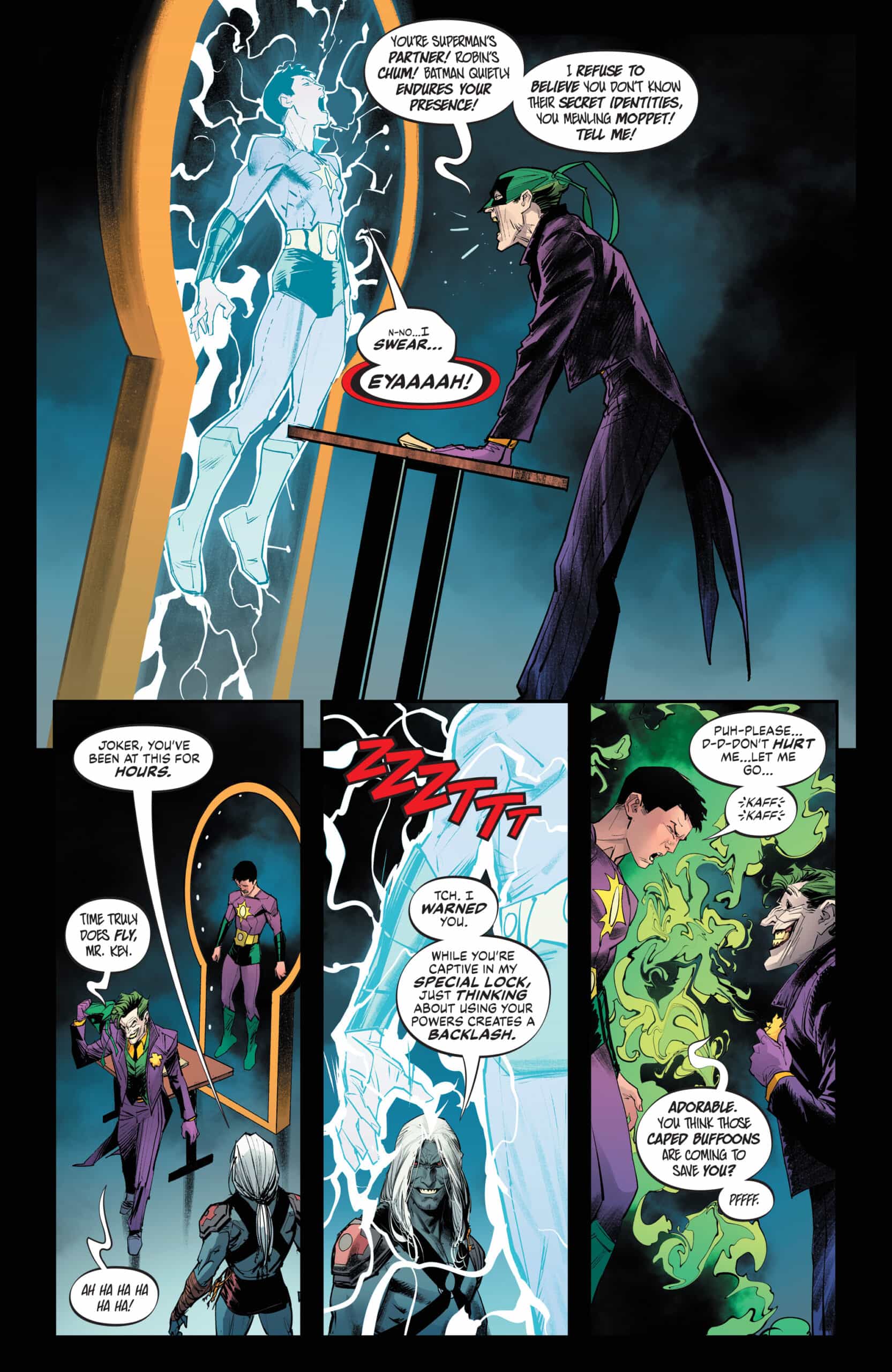 Something I’m continually impressed by is the emotion in characters’ faces. Early on, the Joker tricks Boy Thunder to see Superman, Batman, and Robin as the Joker. The art is incredible and terrifying but what really stuck out to me was Boy Thunder’s face. Mora was able to convey real terror in his eyes. In another sequence, Boy Thunder is pleading with the Key and I was blown away by their eyes. There’s fear in Boy Thunder’s but the Keys capture the awe of realizing Boy Thunder may be the key to the multiverse. Emotion plays such a large role in this issue, especially with Boy Thunder and Superman. We see Boy Thunder’s fear turn to anger almost in real time.
Steve Wands’ lettering is incredible as always. The bold red THWAPs of the Joker slamming down newspapers interlaced with his angry dialogue immediately sets the tone of the issue. One moment especially stuck out to me because of the lettering. Late in the issue, Superman and the rest of the heroes arrive to save Boy Thunder. The lettering for “Step away from the boy” shows the seriousness of Superman but also reinforces the genuine connection he has with Boy Thunder. The voices of the issue are so distinct and Wand’s thoughtful lettering gets the most out of Waid’s script. Having this series take place in the recent past gives Waid plenty of room to play and a chance to use these characters without the weight of everything else happening in continuity right now. The conclusion of this issue made me question continuity a little bit. I try not to put too much thought into it when we talk about years in a comic, but there is a time jump and a reveal at the end of this issue that still has me thinking about it. I think it’s clever and not super forced. The connection between Superman and Boy Thunder really does seem solid so it adds a lot of meaning to where things could go. I am not sure what the history or future of the character is during this continuity but it is a nice reveal for fans of Waid’s work. However, we just saw that Devil Nezha from the first arc played a large role leading up to next year’s Lazarus Planet. What does this mean for Boy Thunder’s appearance?
Batman/Superman: World’s Finest #10 is an incredible book on all fronts and one of the best series of the year! All Batman and Superman fans won’t want to miss this one! With the way this issue ended, I’m looking forward to seeing what the series has in store for next year.
Wolverine taught me that hairy dudes can still get the girl. Providence, Rhode Island professor and writer utilizing comic books in any way possible. If I’m not at a Dunkin Donuts, hiking, or at a concert, you can most likely find me walking to the comic book shop with an ice cold bottle of coke in hand. Follow me on Twitter @BroncoNova
Your email address will not be published. Required fields are marked *