Author(s): James Tynion IV, Matthew Rosenberg
Artist(s): Otto Schmidt
Colorist(s): Otto Schmidt, Francesco Mortarino, Pierluigi Casolino
Letterer: Tom Napolitano
Publisher: DC Entertainment
Genre: Action, Superhero, Supernatural
Published Date: 12/27/2022
The cataclysmic final issue of the bestselling series will end with a bang and a whimper! Green Arrow will lead humanity’s final charge from the blood mines of Smallville. Supergirl’s mission to get off-world comes to an explosive end. And it’s Batgirl versus Nightwing for the fate of the entire planet—the stakes couldn’t be higher as the future of humankind is on the line!
DC vs. Vampires #12 – written by James Tynion IV & Matthew Rosenberg with art and colors by Otto Schmidt with additional colors from Francesco Mortarino and Pierluigi Casolino, and letters by Tom Napolitano – brings the saga of Vampire King Dick Grayson to a close. The issue immediately picks up on the three plots of the last few issues, including the Batgirl-led assault on Gotham, Green Arrow’s revolt in the Smallville blood farms, and Supergirl’s attempt to bring back the sun in Australia. The issue offers plenty of subversion in the last issue, hinting at more to possibly come in spinoff or sequel series.
The scripting for this last issue is excellent, offering three distinct and clear, but open, endings for the various plotlines being juggled. There was a full expectation that this issue would see the plots sync up and show the remaining heroes winning back the day, driving the bloodsuckers back into the darkness. Tynion and Rosenberg subvert that expectation and find separate but still connected conclusions to each. The Gotham plot may have the most unexpected turn, and offer the biggest look into the dramatic tension of a possible follow-up, setting a new status quo for the vampires while retaining the one set for the earth.
Meanwhile, Green Arrow, Swamp Thing, and Grifter succeed, liberating the camp but being thrown into a world still hostile to them. In Australia, Supergirl has received power from the sun and her group has defeated Martian Manhunter. None of these plotlines crossover in the end, which was a great diversion from the typical plot structure, allowing the book to feel complete while still looking to the future. Ending with them coalescing would have given a more definitive ending to this Elseworlds story, and would have made it difficult to envision a new way forward.
Much of that natural feeling to the open conclusion comes thanks to the deep understanding the two writers have for the main characters, like Batgirl, Green Arrow, and Supergirl. The confrontation between Barbara and Dick works because it builds off their shared history, blending with the vampire motif to create a twist, gothic romance. The writing ensures the act of killing Grayson is both heartbreaking and freeing for Barbara, as it allows both of them to move past each other. What the act leads to is equally heartbreaking, and a surprise that speaks to the careful plotting the writing duo has been building across the series. The pieces fall into place, and yet another member of the Batfamily falls, ensuring that the vampirism continues in it.
While the writing is top-notch across the series and this issue, in particular, it’s the art and colors that give this book its unique flavor. Schmidt’s linework and colors are unlike anything from the artist before, moving into a looser style paired with harsh, overwhelming colors to create a distinct visual language for the run. There’s no expectation in the case of this last issue, and Schmidt gets to flex more character and emotional work this time. There’s still plenty of action in all three plotlines, but in contrast to previous issues, it’s the confrontation between Dick and Barbara that stands out. 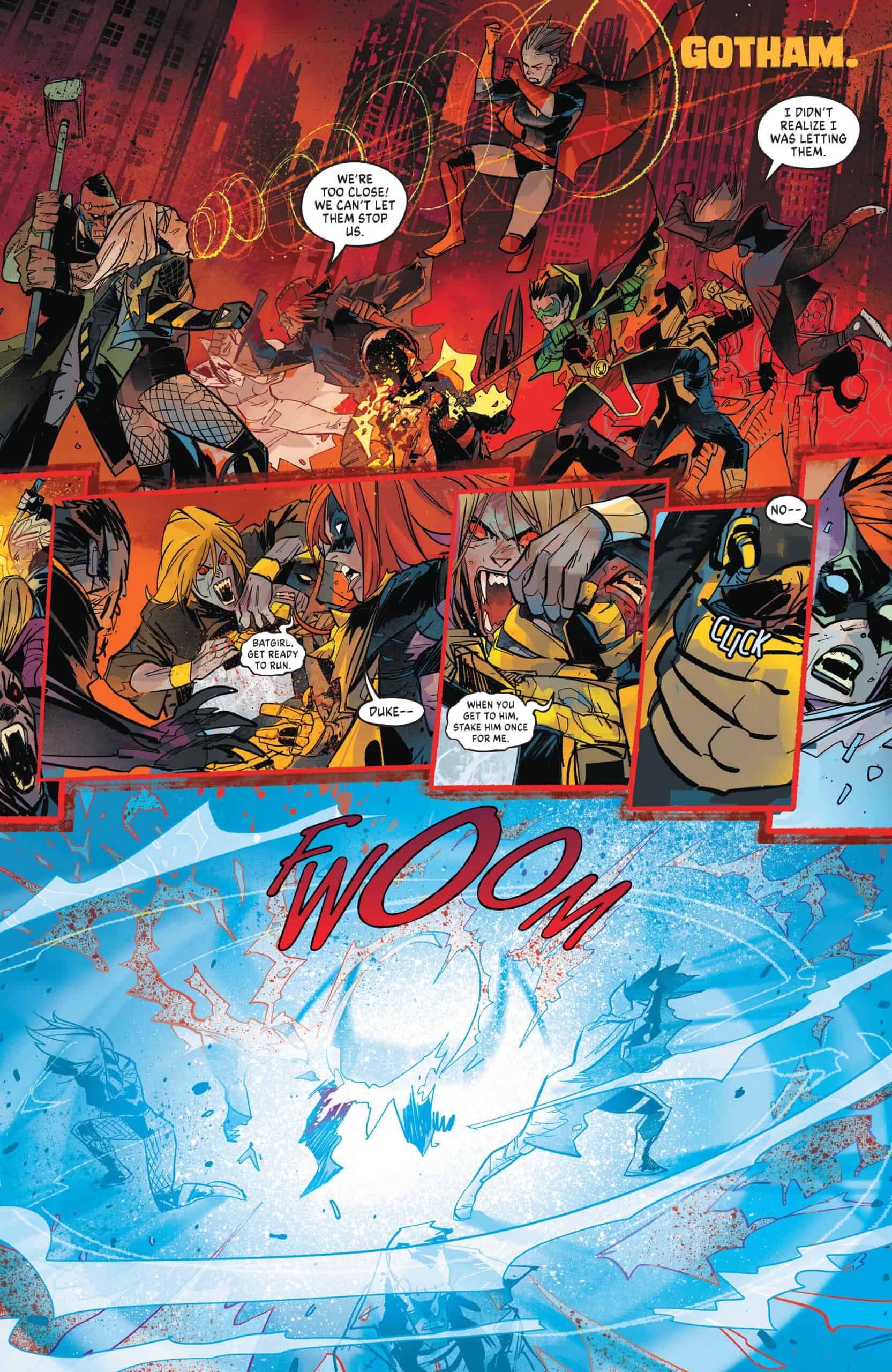 The battle of wills is less physical and more emotional, and the art reflects this with cascading panels that play with form, including stretched-out, thickly-lined reactions to Dick’s cruelty. Schmidt transfers the energy associated with his kinetic, action-heavy panels to these reaction shots and conversation panels, ensuring that the flow still moves at a breakneck speed, but the accelerant comes from the emotion instead of movement. It’s a powerful decision that plays to Schmidt’s strengths as a penciller and is only refined thanks to the book’s coloring.
The abundance of reds and oranges has ensured the book feels in line with the end-of-the-world stories of DC, playing on those notions of a Crisis while telling an original story. (Hell, throw in a Morrisonian vampiric Monitor and DC could have a sequel to Final Crisis on its hands.) The splashes of red are contained in the sequences with Dick and Barbara, and that more subtle coloring feeds the subversion of expectations. That coloring from the three colorists also serves the contrast between the plotlines, as more blacks and grays populate the Green Arrow prison riot, while the stark red and oranges are the most overwhelming in the Australia plot. Schmidt’s differentiation in these plots allows for a consistent style of linework while giving each story its own feeling through the rotation of the overall palette.
DC vs. Vampires #12 is a perfect close for the title, working to bring the final confrontation between Batgirl and Vampire King Dick Grayson to a close while hinting at a possible future for the title. Tynion and Rosenberg’s script balances resolution and set-up to great effect, ensuring a satisfying read while offering a tease at a potential future conflict in this world. The script accomplishes this through strong characterization, working with Schmidt’s emotionally kinetic linework and pulsating colors. The art and colors are the most memorable element of this series, setting the title apart from anything else on the shelf. This book is a must-read for any DC fan, and a great way to draw new readers in, with strong characters thrown into a fun, cohesive Elseworld story.

Your email address will not be published. Required fields are marked *