Author(s): Ram V, Simon Spurrier
Artist(s): Ivan Reis, Danny Miki, Hayden Sherman
Colorist(s): Dave Stewart, Nick Filardi
Letterer: Arian Maher, Steve Wands
Publisher: DC Comics
Genre: Action, Drama, Mystery, Superhero
Published Date: 12/27/2022
Mr. Freeze encounters an Azmer, one of the demonic beings terrorizing Gotham’s villainous underground network, and then Mr. Freeze makes an offer to the Dark Detective that he cannot refuse. Then, the Orgham’s werewolf protector gives Two-Face one more chance to tell him who Batman is. In the backup story, take a stroll inside Two-Face and Harvey Dent’s mind as they try to have a secret conversation outside the listening ears of a mysterious shadow stalking them in this headspace…
Being a lifelong Batman fan, I enjoy any chance I get to review a Batman comic. However, I have to admit that I do not recall ever reading a Detective Comics issue before so this is a first experience for me. What I remember is the main difference between a Batman comic and a Detective Comics issue is that Detective Comics tend to be more about a mystery to be solved than a Batman issue (thus, “Detective Comics”). With this being the first issue I’ve read, I can tell that there is a stark difference with this kind of comic issue, and I really enjoy it.
This issue in particular feels more of an establishing issue, setting up the pieces for the future issues of the story. There’s not a lot of action here, but I believe that to be in the issue’s benefit. Here, we see Mr. Freeze rescuing Batman and making him an offer, essentially telling him that he’s not an enemy of Gotham (and to not try to make him one), while the Orghams are setting into motion their plans to take over Gotham City by use of political charisma, magical tactics, and business acumen. We see the larger stage being set here, which I think is just as compelling as reading a comic packed with fighting, gadgets, and quick quips. 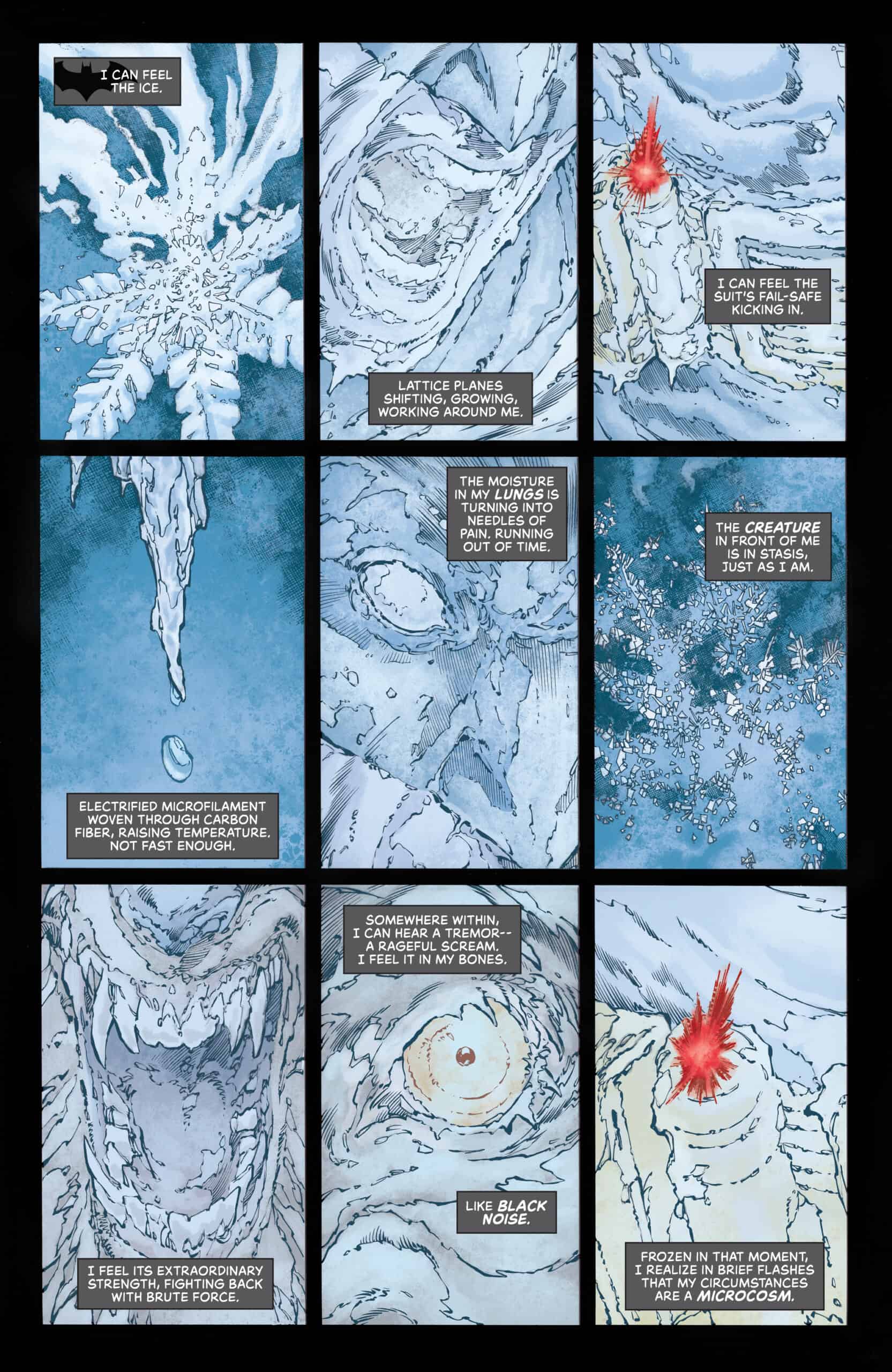 Ram V’s story writing was well done in the main story here. There’s a good balance of back and forth between the events that happen between Batman and Mr. Freeze, and the events in Gotham City with the Orghams, to where they finally merge into one single story at the end, like a reverse fork in the road where all events lead to Arzen Orgham and Bruce Wayne meeting with each other towards the end of the issue. It’s hard to believe that V was able to get so much detail of the story into 20 pages and moved the story along in such a steady pace, and yet he pulled it off quite well. We get a clear picture that all of these individual events happening, from Arkham Asylum getting replaced by Orgham Place to the hostile takeover of a piece of Gotham City from Wayne Realty to Mr. Freeze handing Batman an Azmer, all of these will connect in the end.
The artistic team of Reis, Miki, Stewart, and Maher did a phenomenal job with this story as well. The drawings felt very cinematic like I was going from panel to panel being able to imagine what the scene looked like before my eyes; the use of composition was a delight, finding ways to break the traditional page layout with frame breaks and overlays to help the reader see more of how the story is unfolding in real-time. I particularly love the use of colors from Stewart with the various shading and lighting that he was able to capture, but I absolutely favored Maher’s lettering here. The use of various speech bubbles was very creative in going back and forth between a typical speech bubble and a character speech box to show that the character is still talking but is clearly also narrating the scene that the art is relaying as a form of memory or story sharing. Mr. Freeze and Arzen Orgham’s narrator boxes complemented each other both in style and in colors, showing how they are somewhat opposites but still pose a kind of similar threat to Batman and Gotham City (even though Mr. Freeze may not pose as much as a threat now). 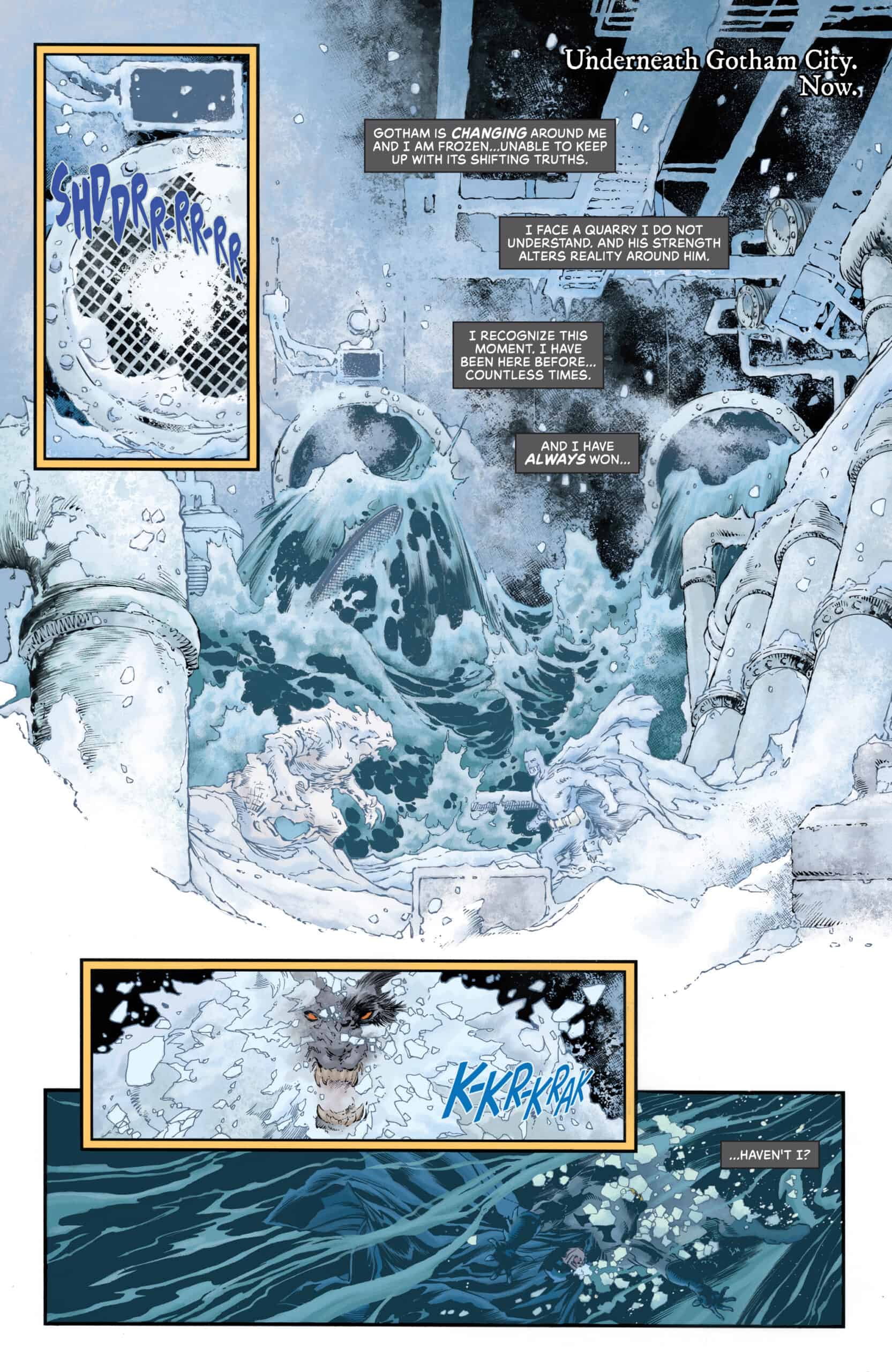 In the backup story, A Tale Of Three Halves, I really enjoyed this story as an interesting take of Harvey Dent / Two-Face in the sense that it’s the same kind of story we’ve seen explored before, but not in the way that we’ve seen. Spurrier’s writing captured how Harvey Dent and Two-Face are not only at odds with each other but how they embrace one another in different ways. In the end, it’s clear that they both need to be accepted in some capacity by the other but Two-Face is surprised at how he’s accepted and it shows a real internal struggle in many ways on how the psyche of the dual personalities will eventually prevail. The artistic team of Sherman, Filardi, and Wands complemented the story with the use of colors, shading, and composition to show these moments of dualism in a variety of ways; from their visual of Two-Face as an individual in the psyche, being a grotesque looking figure, to use of shadows to demonstrate Two-Face being at the helm in the real world. As a backup story, I really enjoyed this and wished that this could be its own spin-off series. 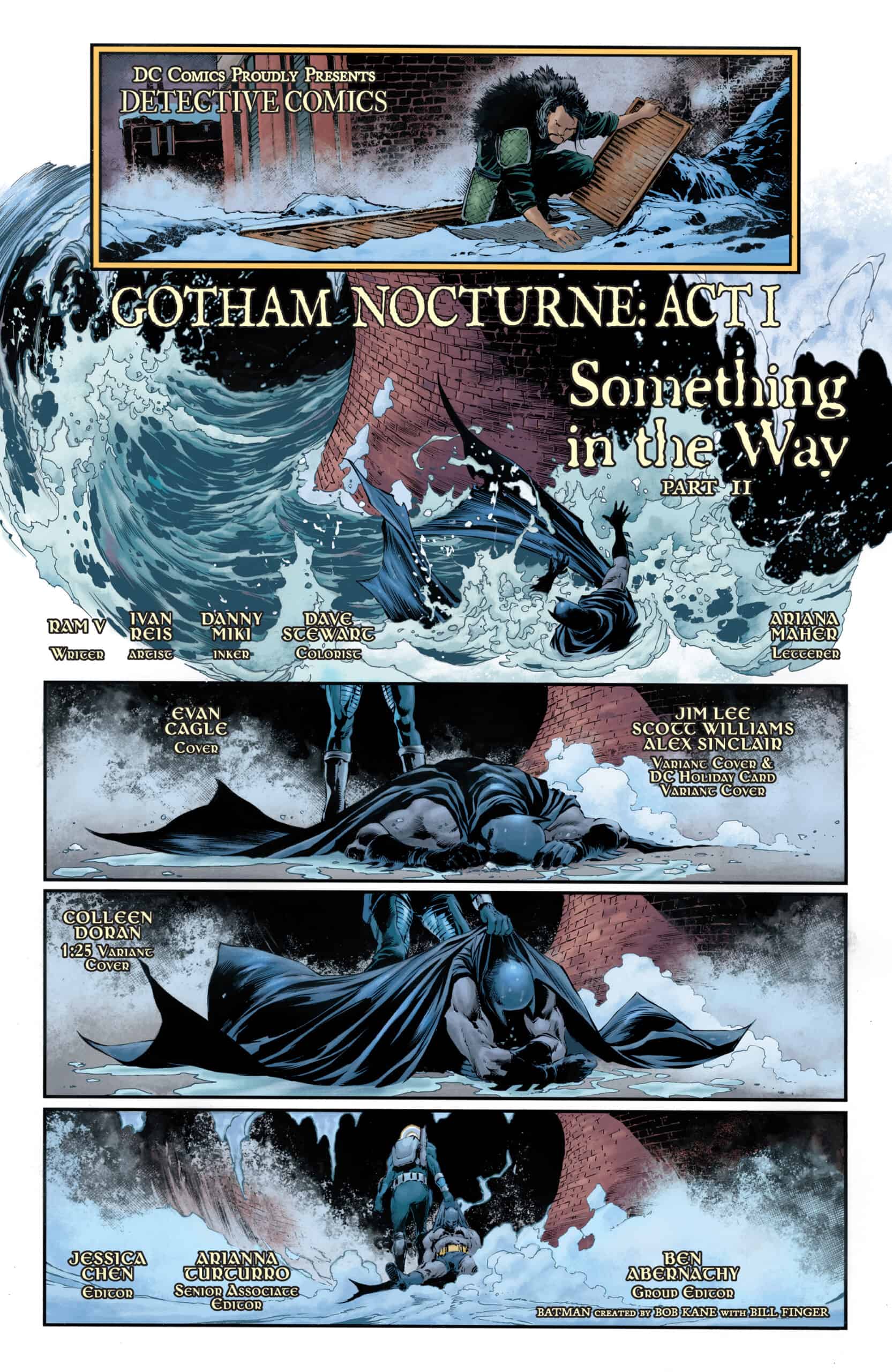 I know there’s a common complaint among comic readers that there are too many current Batman stories. But reading this issue, I can see why this is the case. There are so many ways to tell an exciting story with the Caped Crusader that limiting those storytelling opportunities would be a shame. I love unique, original takes on a popular character, and this issue has piqued my interest in seeing where the story goes from here and the future fate of the soul of Gotham City.
In addition to writing reviews for Comic Watch, Sean is the host of “The Captioned Life Show”, a podcast/YouTube channel for casual and dedicated comics fan (the show is a member of the Comic Watch family). He is also the senior multimedia producer for The Nerd Initiative. He was first introduced to comics by his uncle when he was young and still remembers to this day reading the first issues of X-Men and Daredevil from his uncle’s comic book collection.In the little spare time he has, he also cosplays and attends conventions with his kid. Sean also spends his time with his family and travel – their favorite places are Walt Disney World and going on a cruise in the Caribbean.
Your email address will not be published. Required fields are marked *