Author(s): Paul Dano
Artist(s): Stevan Subic
Colorist(s): Stevan Subic
Letterer: Clayton Cowles
Publisher: DC Comics
Genre: Action, Adaptation, Drama, Horror, Mystery, Psychological, Thriller
Published Date: 12/27/2022
Writer Paul Dano continues the origin tale of the character he portrayed in Matt Reeves’s The Batman. As brilliant forensic accountant Edward Nashton follows the trail of illegal payments and front companies, holding on to his own sanity becomes ever more challenging. Disturbing childhood memories that include an obsession with Thomas Wayne threaten to derail him. Meanwhile, his investigation focuses on a low-level human cog in the crime machine, which leads him to a shocking conclusion that may put his own life at risk. 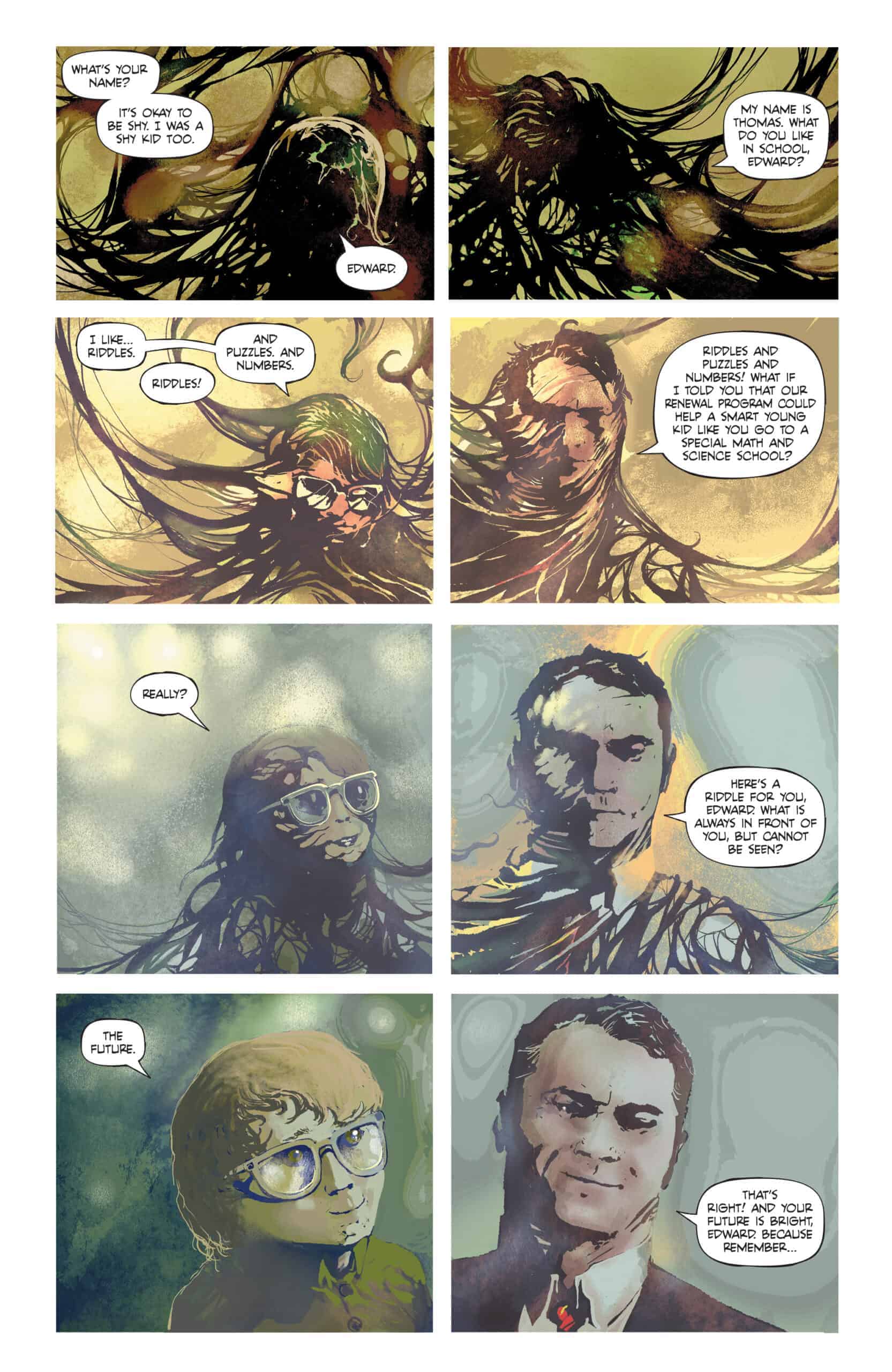 The Riddler: Year One is a great example of how to do a movie tie-in as well as bringing in a celebrity writer. I’m often weary of both types of books, but I am pleased with The Riddler: Year One and issue #2 continues to develop an interesting story with stunning and intense imagery. It helps to have a figure like Paul Dano attached  to draw attention to the book, but the entire creative team also deserves full praise. Along with Paul Dano writing, the creative team is Stevan Subic on art duties and Clayton Cowles as letterer. Clayton Cowles does an excellent job retaining the darker tone of the series. Nashton’s narration boxes are almost black with white lettering and are constant throughout and brilliantly act as the little voice in the back of his head. Cowles also gets creative in a sequence where Nashton is spying on someone through binoculars. He had slipped an earbud into the person’s pocket and was able to overhear the conversation between said person and Nashton’s boss. The sequence is clever and well done in showing that Nashton is smart but not necessarily high tech. 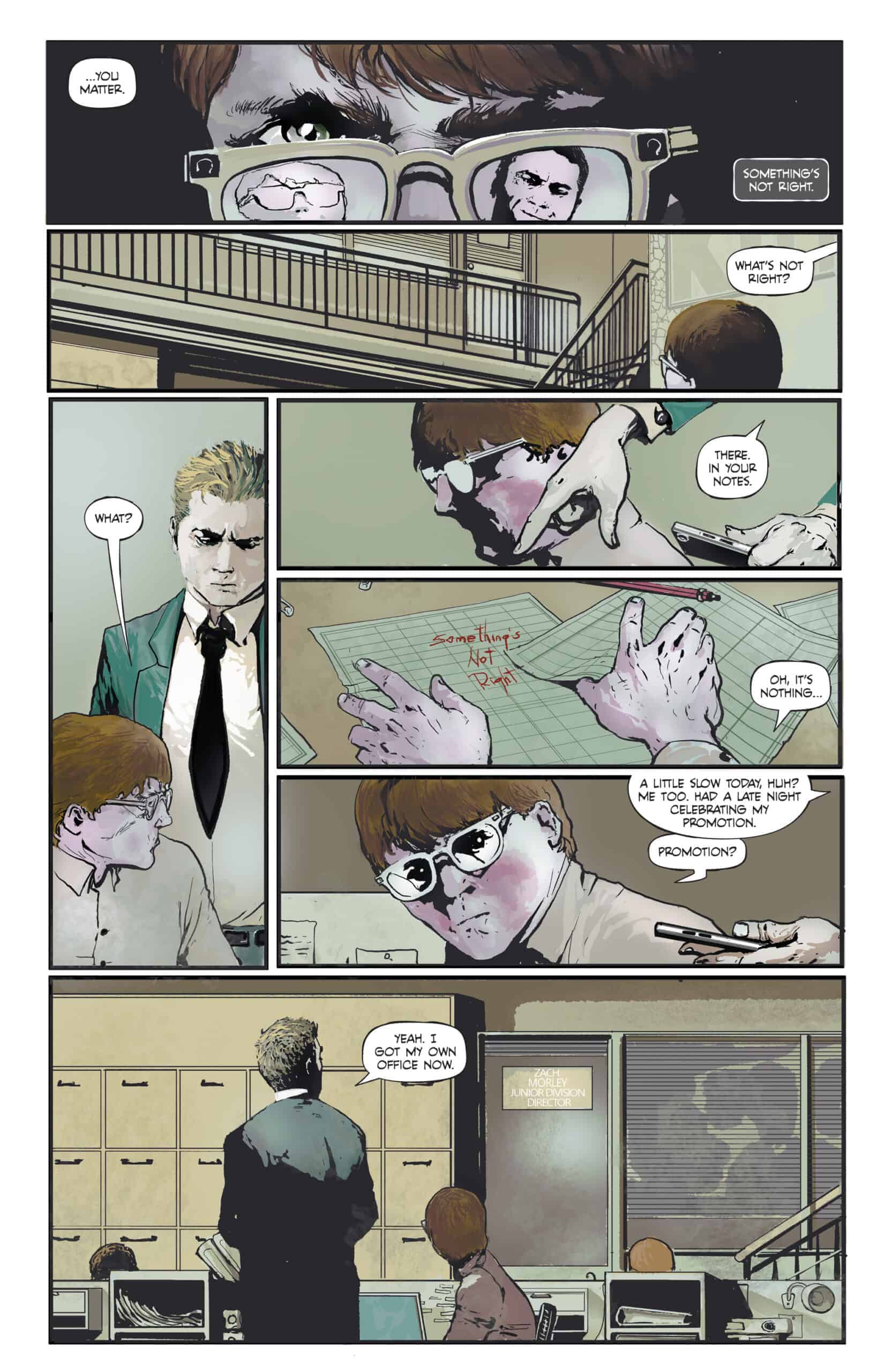 Stevan Subic’s art is perfect for this series. He captures the likeness of Nashton and gritty realism of the world he inhabits without feeling distracting or daunting. Along with the gritty realism, Subic provides some really terrifying and horrific imagery ranging from gore and body horror and even some cosmic horror type creatures.  It is unclear if this is actually what Nashton sees, but the delusions bridge the gap between the grounded and fantastical aspects of the Batman mythos but still feel appropriate for the world of Matt Reeves’ The Batman. Personally, I think it would be a great idea if Stevan Subic was brought on to produce some concept art for future films. I would love for the films to lean in on the horror and fantastical elements we see here.
Dano has a keen understanding of the character and is giving readers a deeply personal look at the man we saw in the film. Even going into The Riddler: Year One #2, I was still a little worried about what this series would do for the character.  Luckily, Dano doesn’t glorify or change the meaning behind his actions in the film, but does add some believable development and a nice glimpse at the nightmare it is to live and work in Gotham City. Imagine if Dwayne Johnson was given the chance to write a Black Adam tie-in? Things could get very out of hand but Dano is respectful to source material as well as the comic medium.
The Riddler: Year One #2 is a must-read for fans of The Batman. Paul Dano, Stevan Subic, and Clayton Cowles give readers a compelling look at the Riddler before he decided to take all of Gotham City down. I am looking forward to seeing where this series goes.
Wolverine taught me that hairy dudes can still get the girl. Providence, Rhode Island professor and writer utilizing comic books in any way possible. If I’m not at a Dunkin Donuts, hiking, or at a concert, you can most likely find me walking to the comic book shop with an ice cold bottle of coke in hand. Follow me on Twitter @BroncoNova
Your email address will not be published. Required fields are marked *